Goldsheen sapphire is a beautiful golden colour stone.  It is a subtle and dark gemstone, which glints in the light. It looks especially good in warm yellow light. If displaying, avoid harsh, white light.

The bright gaudy colours of regular gemstones are fine but sometimes people want something refined and modest. The market prices can be very high. Tanzim Khan is the main dealer for this stone and is selling at typically $800-$1000+ per carat.  (see website) This new discovery is a rare gemstone because of the fact that very few people are in possession of it. What's the real story?

BEWARE of low quality!  Some sellers are trading low quality brown sapphire and calling it golden or Goldsheen. The most common trap in the jewelry business is actually not fake stones, but selling low quality for a higher price than it should be. Do not be fooled. It's pretty easy to tell. The products have only a very weak golden shine and a very dark colour. Do not confuse this with a domed cabochon, which is showing mostly cross section. Some of the photos online may also have been altered to make them look better. All the photos on this website are real and have not been edited. 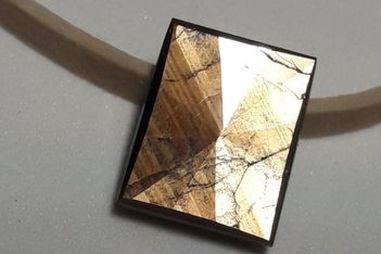 High quality Golden sapphire material will really shine, however
do remember that it also depends on the angle of the light. This
product requires the same attention as rubies or blue sapphires.
There is low quality material on the market - and high quality.
You decide what you want.
A secret mine location
In 2009, Tanzim Khan purchased a huge amount of rough goldsheen sapphire from an African trader, who agreed not to sell to anyone else. However, when I met the man in 2016, he sold me a smaller amount of this very hard to find rough stone, which he claimed came from a region of Kenya that is close to the border of Somalia. Using local people from the area, I investigated this claim and they all reported that there were no mines in this area. This is supported by the fact that deposits of large gemstone rocks do not occur in geographically flat regions. Later, the African told me that the mine was in fact at Garbatula in the central region. When I investigated this, I found that the Garbatula mine produces standard blue Sapphire, not golden. It is clear that to protect their income, African traders  do not reveal their sources because otherwise people would go there themselves to acquire rough gemstones. So the search for the mine goes on! It remains an intriguing secret!

See Wikipedia on Goldsheen Sapphire
From the rough stone we have discovered about four variations:
TYPES OF GOLDEN SAPPHIRE

1. Golden Sapphire - regular
The majority of gem quality material that comes from the rough stone has a golden brown appearance with fine lines. We have a large stock of special pieces and calibrated sets.

This gemstone  changes when moved in the  light. This effect is subtle, although in
some pieces the colours can vary from  blue to green, silver or gold. Within each
piece are unique inclusions that create  this effect. Hemetite and ilmenite provide
the main golden effect with magnetite grain lines. If titanium is present, then there
will be a blue element. Cutting with facets instead of domed cabochons reveals an  amazing new dimension.
Designers using Golden sheen Sapphire: